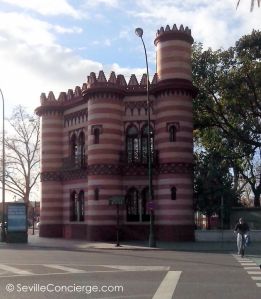 Pretty much everybody who comes to Seville has the Plaza España in Maria Luisa Park on their list of places to see, and rightly so. But here’s a suggestion for something a little different to look at on your way back to the city. Just outside the park proper, across the main road from the Los Remedios Bridge, is an almost fairytale little building decorated with horizontal stripes that always remind me of a wedding cake, and topped with crenellations and a miniature watchtower. It’s popularly known, for historically inaccurate reasons, as the “Queens Sewing Box”, and for this reason has become  attached to a rather poignant story.

Considered to be the first building in the Neomudejar style that was to be so popular during the first three decades of the 20th century, it was built in 1893 by the architect Juan Talavera de Vega as a guardhouse and garden retreat in the grounds of the San Telmo Palace. The palace itself can be found just before the next bridge upriver, an impressive building built in 1682 as the School for Navigators, that’s architecturally one of the most important of the 17th century. This palace and its very extensive grounds were eventually acquired by the Duke of Montpensier, a French aristocrat, and his wife the Spanish Infanta Fernanda Luisa in 1849. Their daughter, Doña Maria de las Mercedes of Orleans, was born in 1860.

It was a troubled period in Spanish history. In 1868 Queen Isabella II was deposed, and Mercedes’ family went into exile, not returning until the restoration of Alfonso XII in 1874. Mercedes and the new king, who was also her cousin, had met in 1872, and on January 23, 1878 the couple were married. It soon became obvious that the new queen was sick, in fact with typhoid fever, and on June 26, at the age of 18, and after just five months of marriage, she passed away.

Quite why the popular tradition should have grown up that because of her delicate health this queen spent much of her time here sewing is unclear, but the name has stuck, and this little building will always be “The Queen´s Sewing Box”.

When the Infanta Luisa died in 1897, most of the gardens of San Telmo Palace were gifted to the city and became the site of the 1929 Spanish American exhibition, now Maria Luisa Park. The Queens Sewing Box is a tourist information centre with a small exhibition and cafe upstairs.

One thought on “The Queen’s Sewing Box”