I recently had the opportunity to visit the Royal Artillery Factory in Seville, which was one of the oldest industrial complexes in Spain, with a history going back to the 16th century, before it was finally closed and abandoned in 1991.

The iron foundries that were the precursor of the later artillería were set up on land at the edge of the San Bernardo neighbourhood that already existed outside the eastern wall of the city by the Morel family in 1565. Their work included candelabra for the cathedral and ironwork for the Giralda tower, but after the death of the founder the foundries were sold off, passing eventually into the ownership of the Real Hacienda (Royal Treasury) in 1634. 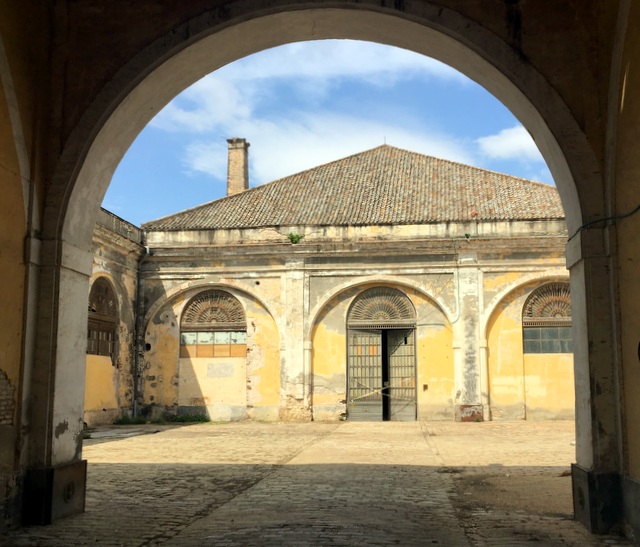 It beccame the Artillería in 1720, and a new foundry (now called the Old Foundry) was built for the casting of cannon and other military hardware. Expansion continued throughout the 18th century, with additional foundries, workshops and ancillary services, and the modern facade of the building was completed towards the end of the century. In the Napoleonic period the complex was taken over by the French, and the howitzers used in the seige of Cádiz were made here. When the French were forced to retreat much of the original equipment was destroyed, but was subsequently rebuilt during the 19th century, when it became one of Seville’s most important industrial establishments.

Despite more modernisation in the 20th century it gradually became obsolete, and in the 1960s and 70s most of the production was transferred to newer facilities in Alcaá de Guadaíra, and in 1991 it finally closed its doors forever.

Although some renovation work has been done (and is ongoing), most of the buildings are still rather delapidated, and not accessible to the public, but nevertheless one can get a good idea of the large scale industrial architecture of the day, including brick vaulting reminiscent of the bodegas of Jerez in the older parts, and the “Victorian” workshops that surround them (you can get a view of some of them, but can’t actually go into them).

Still, it was fascinating to see something of the city’s industrial heritage, and to remember that history is not all about Cathedrals, Palaces, and other monuments, and that for a majority of the common people life had more to do with this harsher aspect than it did with the grand lifestyles of the aristocracy and the rich.

One thought on “The old Seville Artillery Factory”