A totally different way to beat the heat in Seville is to follow the Sevillanos and get outta town! One of my favourite summer day trips is to Cádiz on the Atlantic coast, one of the most picturesque cities in Spain, with a history that stretches back around three thousand years. Not only that, but if there’s any summer breeze going, Cádiz, on a headland surrounded on three sides by water, is the place to take advantage of it.

Although it has plenty of that quintessential Spanishness, Cádiz has a completely different feel to it than Seville. The streets are generally straighter and longer, and generally pedestrianized, and there are a number of “grand plazas” that give the city an air of nineteenth-century civic pride. My favourites are the contrasting pair of Plaza Mina, full of trees and ornamentation, and the wide open marble-paved Plaza San Antonio. 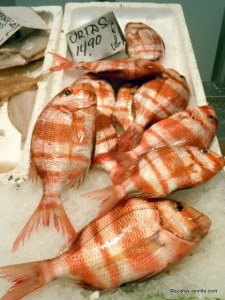 But that’s for later. My first stop after arriving is usually the Cathedral Plaza and my favourite pastry shop for some elevenses with a view. This is the oldest part of town, and apart from visiting the Cathedral, its worth going through the Arco de la Rosa and taking a stroll through the Barrio El Pópulo to the Roman amphitheatre, which was rediscovered entirely by accident in 1980.

The next stop has to be the central market, only recently returned to the renovated market hall, for a browse around the displays of fresh fish and fruit and veg so typical of Spanish markets. The area around it is always full of life, too, with little stalls selling flowers, jewellery. and all-sorts.

For me, the best way to see most of the city is simply to walk around its edge, taking whatever detours I need to see things that I want to. There’s plenty of those but there are a few that I always want to go back to no matter how many times I visit. Foremost of these is the brooding mass of San Sebastian castle, and the causeway that leads to it, although unfortunately, the castle itself is not open to the public. The best view is from another favourite place, La Caleta Beach, where you can check out the Balneario de la Palma, a “Victorian-style” beach spa, and have lunch at the beachfront restaurant there, watching the sun sparkling on the water and the little fishing boats bobbing on the waves.

Further on are the fortifications of Santa Catalina Castle, built to protect the city in the 17th century. The little turrets that you see dotted around the seafront are called baluartes, and are a distinctive feature of the city. Also here is the Parc Genovés, a botanical garden with many species brought over from the Americas. This is a fascinating place, with an artificial cataract and the strange topiary of the trees on the main path.

Now’s the time to visit those plazas, before ending the afternoon with a drink and a bit of people watching in the Plaza San Juan de Dios, opposite the old town hall. It’s a short walk to the train station from there and during the pleasant ride home I look forward to arriving back in Seville just in time to meet friends for an evening tapeo.