Plaza Virgen de los Reyes The Plaza Virgen de los Reyes, or Virgin of the kings, is the beautiful and iconic square between the Cathedral and the Barrio Santa Cruz. In the centre is the fountain designed and built for the 1929 Spanish-American exhibition, surmounted by an ornamental farola (street light), and its periphery is formed by three of Seville’s most important historic buildings, the cathedral (including the Giralda tower), the Archbishop’s Palace and the Convent of the Incarnation. Although these buildings are much older, the square itself was only created at the end of the 18th century by the demolition of administrative buildings belonging to the Church, and has only had its modern form since the remodelling of its eastern side for the widening of Calle Mateos Gago in the 1920s. Enjoy the view and the comings and goings of the horsedrawn carriages from one of the benches in the shade of the orange trees.

Plaza Santa Marta Santa Marta is the little square next to Virgen de los Reyes, reached by way of the little alley behind the statue of the Pope. Even though it’s so close to one of the busiest places in the city it’s a little oasis of peace and quiet. The cross in the centre dates to 1564, but was only placed here in the early 20th century. The door to the right is the entrance to the Monastery of the Incarnation.

Plaza del Triunfo Alongside Virgen de los Reyes is the Plaza del Triunfo, surrounded by Seville’s three world heritage sites, the Cathedral, the Alcázar Palace and the Archivos de Indias, as well as the Casa de la Provincia. The small monument in front of the Archivos, which gives the square its name, celebrates the safe completion of the mass that was interrupted by the Lisbon earthquake of 1755, whose effects were also felt in Seville. The modern appearance of the square, including the statue of the Immacualate Conception, whose steps are a popular gathering place, dates back to the early twentieth century.

Patio de Banderas Going through the archway beside the square brings you to the Patio de Banderas (Flags), where the Kings of Spain once greeted foreign ambassadors. Notable for its rectangular promenade formed by two rows of orange trees, and its fountain, it was recently the site of archaeological investigations which brought to light some of the earliest stages of the Palace’s history.

Plaza de la Alianza This charming little square with a length of the old wall on one side and a simple central fountain, was once called the Plaza del Pozo Seco (the dry well).

Plaza Doña Elvira Possibly the most picturesque little square in Seville, and one of the most frequented by tourists, it’s supposedly the birthplace of Doña Elvira, the impossible love of Don Juan. The square was actually created as part of the redevelopment of the barrio for the Spanish-American exhibition, and owes much of its beauty to the symmetry of its orange trees, ceramic benches and central fountain. 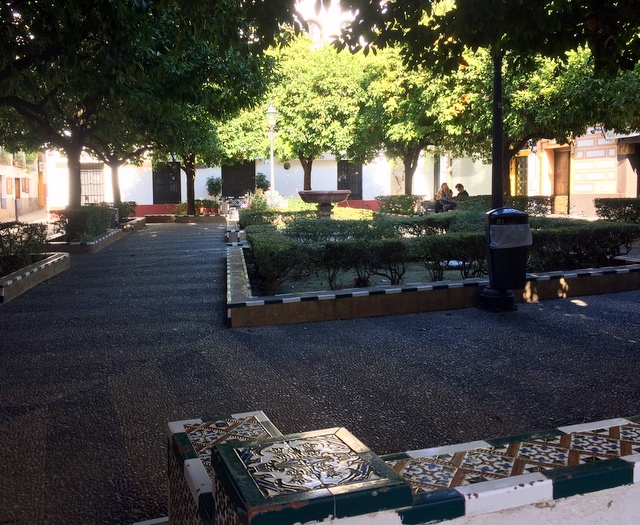 Plaza Alfaro Plaza Alfaro is the little square at the entrance to the Murillo Gardens. Look for the Moreton Bay fig trees just inside, the water pipes in the exposed end of the old wall, and the ornate entrance to the Casa Palacio de la Marquesa de Pickman a few steps up Calle Lope de Rueda.

Plaza Santa Cruz Once the site of one the Jewish quarter’s three synagogues, and after the pogrom of 1391 of the parish church of Santa Cruz, the square was created by its demolition by Napoleon in 1811. The church was the burial place of the artist Bartolomé Murillo, as attested by the plaque in one corner of the square. The rather strange metal structure in the centre is the Cruz de la Cerrajería, once located at the corner of Calle Sierpes and Calle Cerrajería, and moved here in 1921. Notice the serpents and the little figures on the top corners. 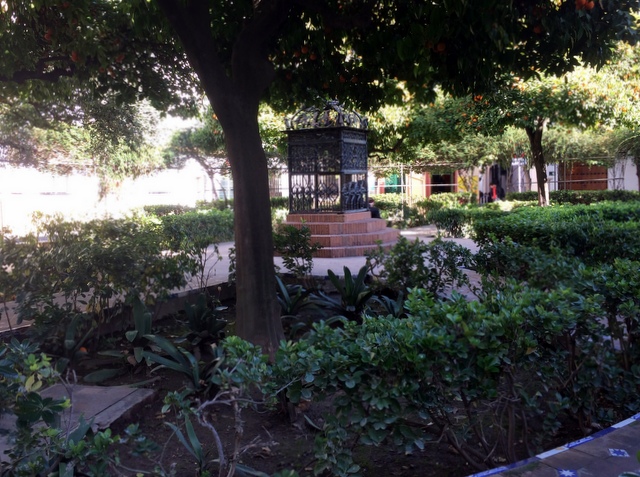 Plaza de los Refinadores Los Refinadores (the refiners) is another of the charming squares that are such a feature of the Santa Cruz. The circular benches around the five palm trees make a quiet and shady spot for a few minutes tranquil contemplation. The statue is of the legendary Don Juan Tenorio, and was erected in 1975. Also of interest is the Casa para Luis Prieto, which is the one on the corner with the big glassed-in balcony, designed by Aníbal González, who also designed the Plaza de España.