Before I came to Spain I laboured under the misapprehension that a tuna was a small round fish that fit neatly into a tin. Apparently not. Apparently it’s a 200+kg monster whose various parts have special names like ventresca, tarantelo, cola blanca or morillo, so that you know exactly what you’re friendly local tapas bar waiter is going to bring you. Now, I did actually discover this pretty quickly, but a couple of days ago I was able to attend an event that brought that fact home to me in a compelling way.

The event in question was a ronqueo, the carving of a tuna into its component parts (the name derives from the Spanish word for snore, and is supposed to be the sound of the flesh being stripped away from the spine), ready to be turned into delectable little fishy dishes. The ronqueo was organised jointly by four bars, La Pepona, Sidonia, Nazca and Duo Tapas, who hosted the event, with each getting a share of the spoils.

In preparation, the bar was emptied of most of the furniture, and plastic sheeting laid on the floor – although the fish is, of course, already dead when it’s brought in, and expert cutting minimises the “blood and gore” that you might otherwise expect, this is nevertheless a sensible precaution that makes cleaning up easier. With everything prepared and the butcher (does anyone know if this is the right word in this context?) in attendance the tuna is wheeled in on a trolley and unloaded, and the work begins.

Using some very sharp knives and an instrument like a small machete the head is cut off, and then the brains, heart and then other internal organs removed. I was most surprised by the appearance of the gills, dark concertina like masses that were much larger than I expected. Next the fins and spines are removed and discarded, and then the cuts from the belly – ventresca, descargamento and tarantelo – separated from the rest of the fish, almost as if it was being unwrapped. Next were the long rolls of red meat from either side of the spine, the descargado and plato; these are what you most commonly see on the fishmongers’ stalls in the markets, waiting to be sliced into steaks. Then the tail is held up and the last cuts, the cola negra and cola blanca, are cut away. 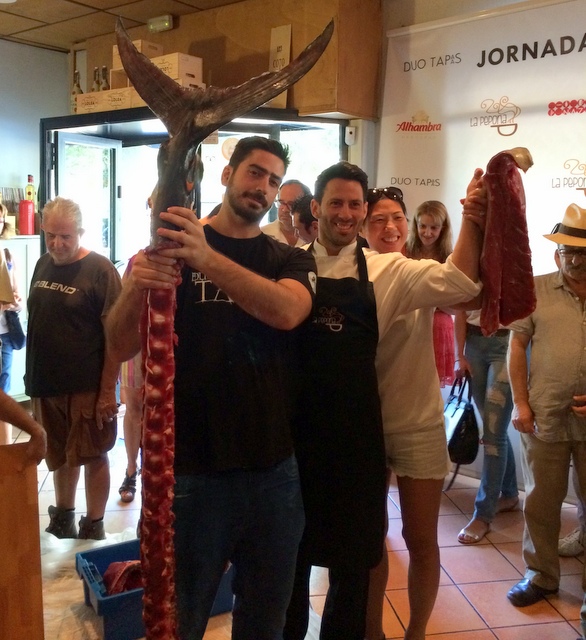 It’s all over surprisingly quickly, and the various cuts laid out on a long table (a bit like an anatomy lesson in Bones). It’s a lot of tuna, and definitely isn’t going to fit into a tin, which in any case feels increasingly like sacrilege. Final touch is a glass of sherry and some perfect hors d’oeuvres prepared from the recently deceased. All in all, not a bad morning’s work. 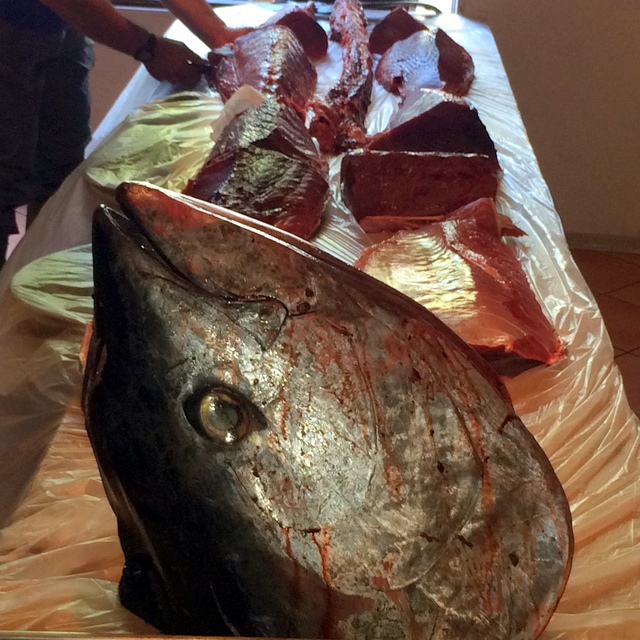