A bit late with this, as Seville’s annual religious extravaganza finished ten days ago, but better late than never.

For those who don’t know, Semana Santa (Holy Week) is one of the world’s most important religious festivals, and the celebrations in Seville are probably the biggest and most fervent in Spain, drawing visitors from all over the country and from abroad.

During the course of the week, from Palm Sunday to Easter Sunday, more than forty processions make their way from their home churches and along the sacred way to be blessed in the Cathedral before returning home, some of them taking up to 12 hours for the round trip.

Each procession consists of (usually) two “pasos”, or floats, one with a statue of the Christ, the second with the Virgin, which are carried aloft by teams of men (costaleros) concealed beneath them, that are accompanied by brass bands and the penitentes (the guys with the pointy hoods, which are worn to preserve anonymity), and even for the non religious the overall effect is quite moving, with the statues swaying above the crowds as they make their way along their assigned routes. 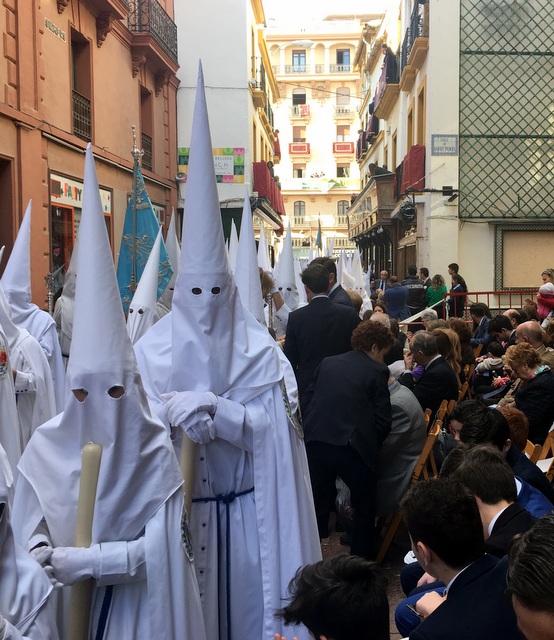 Although it has changed a lot over the centuries, with the modern version developing in the 19th century, the roots of the festival go back to the mediaeval guilds and “self-help” religious brotherhoods, and these have long inspired considerable devotions. Some of the statues are of great age and artistic importance, the floats ornate, guilded, and in the case of the Virgins canopied and bedecked with flowers.

Definitely worth experiencing at least once, as there’s nothing quite like it anywhere else.