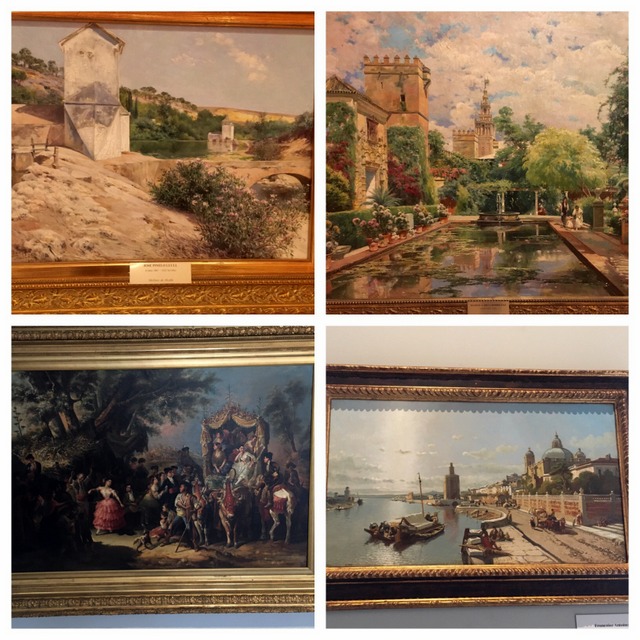 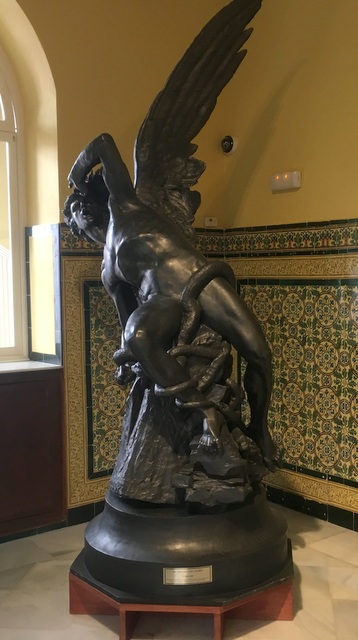 It seems that 2016 is to be the Summer of the Night Visit in Seville, as a number of important historic buildings open their doors as darkness falls for unique experiences in some of Seville’s special places. I’m planning on doing several of these, and last Tuesday was the first, a night visit to the Hospital de los Venerables Sacerdotes, in the heart of the Barrio Santa Cruz. The visit, conducted by our guide Sergio Raya, was to be partly by “candlelight” (battery-powered) to better recreate the atmosphere of the hospital’s early days.

Those early days were in the 17th century, a time of both great wealth for some, great poverty for many, scarred by general economic decline and repeated outbreaks of plague. The relief of hardship fell partly on the church, but mainly on the religious brotherhoods (hermandades) that are now better known for their role in the Semana Santa celebrations. One of these was responsible for founding the forerunner of los Venerables in what is now the Calle de Jesus de Gran Poder in 1627. It moved to Calle Amparo in 1659, and in 1675, while under the direction of Justino de Neve y Chavas, it was granted some land and houses on its present site in the heart of the Santa Cruz by Don Pedro Manuel Colón y Portugal (a descendant of Christopher Colón/Columbus), Conde de Gelves and Duque de Vergara. Building work took twenty years to complete, with Neve himself dying in 1685, but in 1698 the Hospital was formally blessed by the Archbishop of Seville.

The hospital is laid out in two stories around a central patio-courtyard, one of the most unusual in Seville as the central area is below the level of the surrounding colonnaded gallery, and the circular fountain is sunk still lower. Although visually pleasing, the primary reason for the unusual design was apparently the problem of drainage. 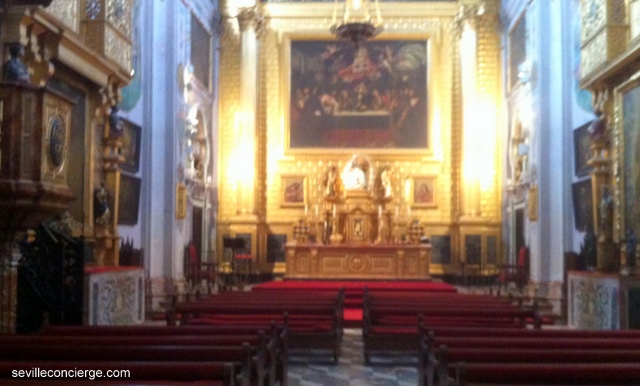 Our first stop was the Hospital’s most important building, the Church (tending to men’s souls being more important than tending to their bodies). Although not large, the Church is densely furnished and decorated, with works by Valdés Leal, Juan de Oviedo, and others making it one of Spain’s most important Barroque church interiors. The symbolism of the paintings and sculptures was intended to reinforce the idea of the centrality of the Church and Clergy in the moral life of the nation and the source of all moral authority. 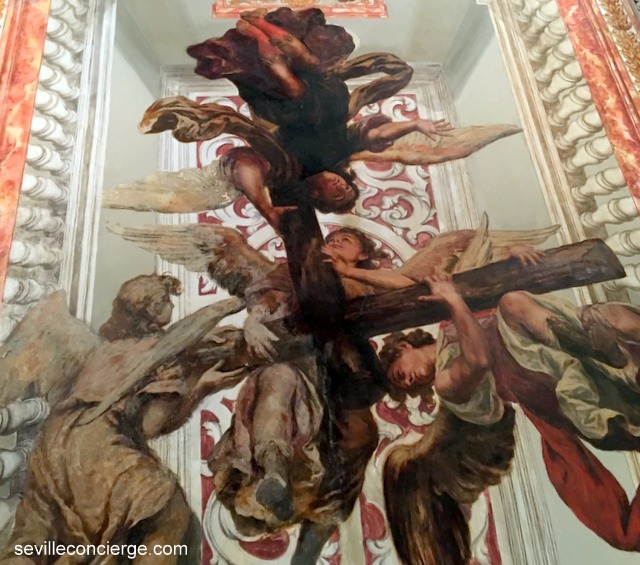 Ceiling of the sacristy

From the Church we went on through the sacristy, which has a remarkable painted ceiling intended to make the room appear much higher than it is, to the sacristy patio, one of the areas of the complex not normally open to the public. This was in fact where the hospital’s first patients were housed before the completion of the building. At one end is “the back door” which gives access to Calle Consuelo, and at the other a door leading into another small patio with a fascinating history of its own. This was once the Corral de Comedias (a type of small theatre, similar in artistic and social function to the contemporary Globe Theatre of Shakespeare) de Doña Elvira, in its day (1578-1632) the most popular in Seville. It took its name from Doña Elvira de Ayala (born 1377), whose Palace was in the nearby Doña Elvira Square, the theatre being in the palace gardens. Theatrical luminaries of the day whose works were performed here include Tirso de Molina, Miguel de Cervantes and Lope de Vega.

Next stop was the hospital ward on the lower floor (there was another on the floor above), a large open room with a high ceiling supported by a row of arches down the centre. The patients’ beds would have been arranged along the walls on either side, a model common to hospitals almost until modern times. From there we went up the main stairway with its ornate cupola with the Papal tiara and Saint Peter’s keys to the upper gallery. On the side next to the church a door leads to a screened balcony inside the church. Further on is the library, created in 1981, and housed in the original refectory, from the far end of which a narrow stairway leads up to our final stop, the Torre Mirador (watchtower), which has a mudejar style ceiling and views over the Santa Cruz, which looks very different from this height. 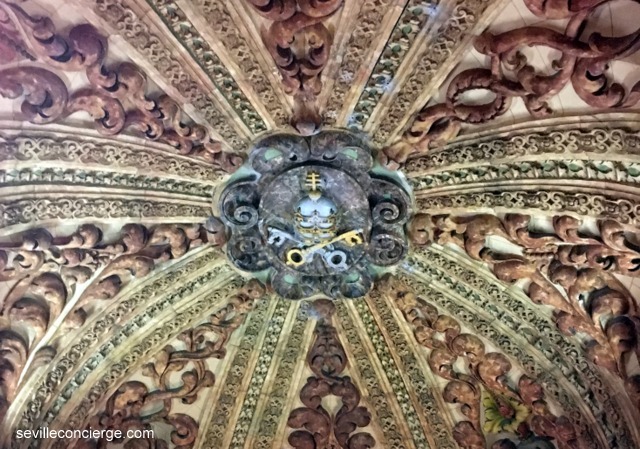 Cupola of main stairway with Papal tiara and keys.

Thanks are due to both Focus Abengoa and Engranajes Culturales for the organisation of this fascinating tour, and more about other night tours and cultural experiences can be found here.

If you’re coming to Seville on holiday, there’s no shortage of interesting things to see and do, from sightseeing the monuments and exploring the old city, to museums and art galleries, flamenco, and of course, eating, drinking and people watching in the bars and cafes. But as from last week, after a long period of planning and construction, and numerous delays, Seville has a new attraction that extends the range of things to do.

The Seville Aquarium has some forty tanks, holding about 400 different species of marine life, from flotillas of small, brightly coloured tropical fish to ominously cruising sharks, from urchins to octopus, and even giant crabs and turtles. Conceptually, it follows the path of Magellan’s first circumnavigation of the world (which began in Seville in 1519), and the different creatures he would have found on the voyage. There’s a soothing fascination to watching the fish glide around their tanks, and although it’s on a relatively modest scale it’s a great way to spend an afternoon – especially for kids on a wet or very hot day.

I was fortunate enough to have an invite to the press opening. So here are some photos of my sneak preview of the Seville Aquarium. 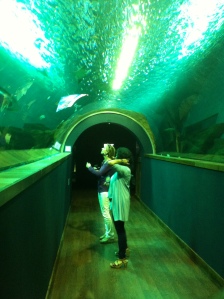 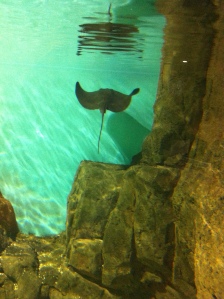 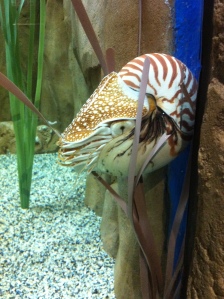