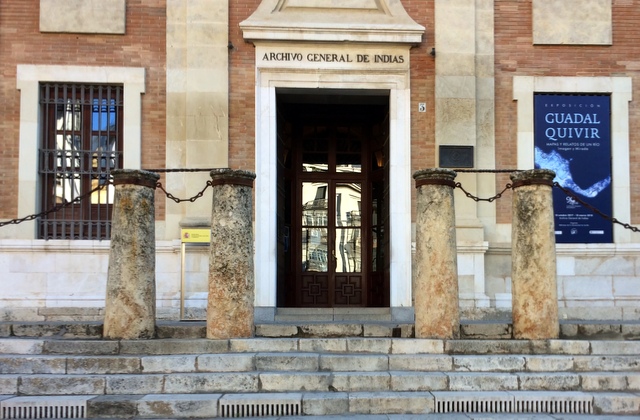 Entrance to the Archivo

El Archivo General de Indias (General Archive of the Indies) is the third, and probably least well known, of Seville’s World Heritage monuments, and is located between the other two, the Cathedral and the Royal Palaces, in one of the most impressive of such groupings anywhere in Europe. The Archive itself was created in 1785 by order of Carlos III, to house all the documents related to the exploration and administration of Spain’s overseas possessions, until then housed in several smaller archives that were no longer large enough to hold the volume of paperwork involved. Today, mauch of the Archive is housed in a second building nearby, but is still an important resource for historians studying the Spanish empire period.

The building itself was originally constructed as a Commodities Exchange, the Casa Lonja de Mercaderes, for the merchants trading with the New World. In the years after Columbus discovered the Americas (1492) Seville was awarded a monopoly of the trade, and the 16th century saw a rapid increase in commercial activity in the city. Because of its central location and proximity to the port, much of this activity went on around the Cathedral, particularly the Puerta del Perdón and the Fuente de Hierro (where the Sagrario church is now), causing considerable friction between the ecclesiastical authorities and the merchants. Eventually, in 1572, a purpose built market was commissioned by Felipe II, and was constructed between 1584 and 1598 according to designs drawn up by Juan de Herrera. Later, in 1717, after the silting up of the river had made it impossible for ships to come upriver to Seville, the market was transferred to Cadiz, and the building became a lodging house, until Carlos selected it as the site for the new archive.

As we see it today the building is an impressive example of Italian influenced Renaissance arcitecture with a regular and balanced geometry, around a large internal marble floored courtyard. One of its finest features is the grand staircase, added in the late 18th century as part of the conversion programme. The gardens in front of the main entrance are much later, being added in 1928 as part of the creation of what is now the Avenida de la Constitución in preparation for the Spanish – American expo of 1929.

Fountain in the gardens