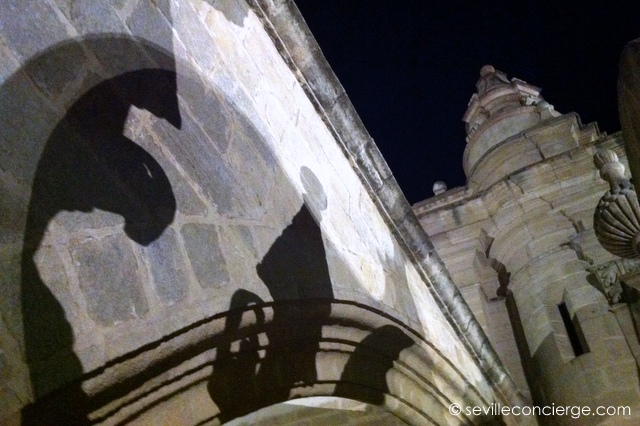 If you buy an entrance ticket to Seville’s famous Cathedral, you’ll have the option of a combined ticket that also allows you into the nearby church of El Salvador, the second biggest in Seville after the Cathedral itself. Although not as grand as its big sister, it is nevertheless impressive, both from outside in the Plaza, and from inside, where one is almost surrounded by the huge, ornate shrines and altarpieces, but for me the most interesting things about it are the things that you usually can’t see. For although the present building was only completed in 1712, the site has been in use since antiquity, and beneath its floor is a “layer-cake” of the history of Seville, stretching back through the late Mediaeval period, the Grand Mosque of the Islamic period and the Visigothic church, to the time of the Romans, when the basilica, the most important public civic building in a Roman city, stood on this spot. Over the last ten years extensive restoration work in the crypts has revealed many interesting things related to that past, and I was recently fortunate enough to take part in one of a season of night tours that have given members of the general public the opportunity to learn more about this unique heritage.

The tour gathered in the patio, where you can already see the tops of the original Moorish pillars and arches, and also the old minaret, now a bell-tower, before our guide led us down into the crypts. These proved to be surprisingly un-creepy, as the renovation work had included modern lighting and air-conditioning as well as structural supports for the pillars of the church above us, and we were able to see some of the tiled floors from the mediaeval period (the floor of the present church having been built above these), preserved Roman and Arabic inscriptions, and the alcoves where many hundreds of people, often children, had been buried through the centuries. At the very lowest point we saw the buried stream that had been the source of the problems that had led to the necessity for works beneath the church. 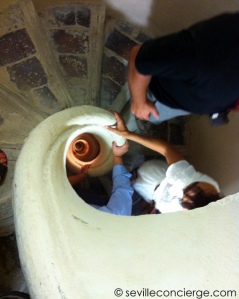 We then had the unusual experience of going into the chamber (the camarín) behind the seated statue of the church’s patroness, the Virgin of the Waters. This can be glimpsed from outside the church through the window where she is placed to watch the Semana Santa processions.

The final stage of the tour took us upwards, by way of one those cramped, tightly curved spiral staircases, first to the balconies inside the church, and then onto the roof. I don’t have much of a head for heights, but the view over the surrounding streets as we did a complete circuit before descending to ground level again was incredible.

All in all it was a really interesting and unusual experience, and I would urge anyone who has the opportunity to do this tour not to miss it. The guided night tours (in Spanish) cost 12 euros with a minimum group of 10 people and are available until September 15th (the day tours are available year round). For more information go to the Cathedral Reservations Page.