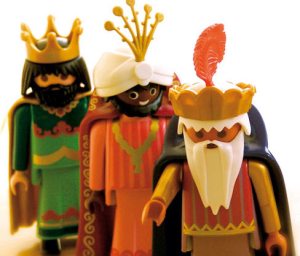 Although Father Christmas/Santa Claus has been gaining ground in recent years, in the south of Europe, and particularly the Spanish speaking world, the bringer-of-gifts is a much older figure, or more properly some much older figures, as there are three of them – the Three Wise Men of Biblical tradition, now more popularly known as Los Reyes Magos, the Magic Kings (Magos can be translated as either wizard or wise, and given that they “followed a star” they were probably astrologers). Although unnamed in the Bible, they have been popularly known since times immemorial as Melchior, Gaspar and Baltasar, and, despite the Pope’s recent assertion that they were Spanish, every Spanish child knows that they actually come one from each of the three continents, Melchior from Europe, Gaspar from Asia and Baltasar from Africa (no America or Australia in those days).

They don’t come at Christmas either, but on Epiphany, January 6, at the end of the holiday period, and they travel by camel, but they do visit every house in a single night. In the days before Reyes children must write a letter to the kings, so that they know what presents are to be delivered, but if they’ve been bad they may find that their only present is a lump of coal.

In Seville (and many other places in Spain) there is a big parade, the Cabalgata (cavalcade) de los Reyes during the afternoon and evening of January 5, and large crowds line the streets to watch the parade go by. The unique feature of these processions are the sweets that are thrown into the crowds for the children to pick up.

One last tradition is the food. Roscón de Reyes, made almost everywhere in the Spanish speaking world as part of the celebration of the Three Kings, is like a large doughnut with candied fruit (and these days, chocolate). It is common for these (if home-made) to contain “surprises”, small items for the children to find when the cake is eaten.